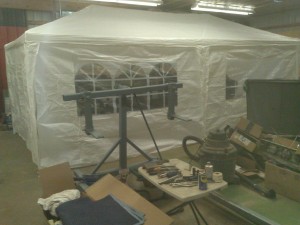 This stuff is a lot harder than it looks. I watched a lot of videos, and it looks so simple, just drill some spot welds and off comes the panel. Yeah, right. Never mind that it’s tough to find the exact center of the weld so you get a clean cut, it’s a tiring and trying process. Then too, it seems that Saab used a lot of tack welds, either for initially securing a part or because a spot was inaccessible to the spot welder. Of course, if a spot welder couldn’t get in there, neither can a grinder. However, in due course, I was able to remove the body sections that I am replacing with good donor sections.
Looking at the photo, you might think I’m getting ready to party in the barn. Nope. The party tent is my maybe not-so-bright idea for contain blasting media. We’ll see if it works. For a more detailed story, please continue reading. 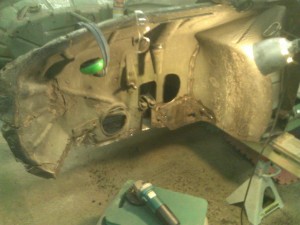 As described previously, I intend to replace the left front wheel housing (accident damage) and the trunk floor (rust). The first step for me was to clean the spot weld and tack weld areas so I could see where drilling or grinding was necessary. For this, I found a wire brush in my Makita 7.5 amp angle grinder worked great. Leaves a lot of black dust, but the metal shines. Most of the welds are spot welds but there are also many tack welds. It’s rather obvious based on the varying quality and spacing of these welds that these cars were pretty much hand built in 1966.
I was intrigued by the welds at the rear-most edge of the front wheel housings. If you look at the photos, it looks like the welder started at the top, pulled the trigger and held it while sweeping downward, pausing where welding was desired, and leaving spatter trail in between. Welding in the donor car was similar. And, you will always find one tack weld hiding inside, where the front wheel housing meets the highest point of the cross member. There are more photos than necessary, but I put them all here just for complete documentation. Scroll down for the drilling/grinding discussion… 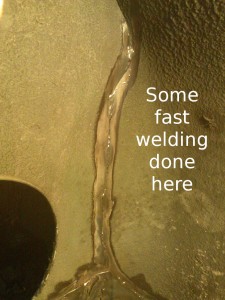 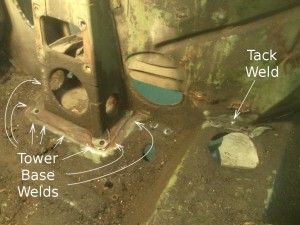 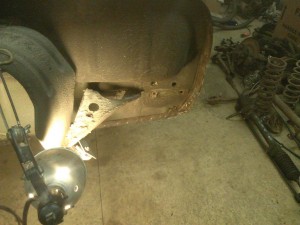 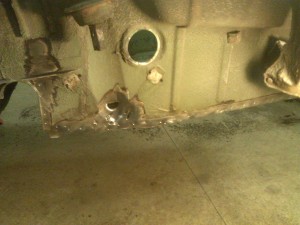 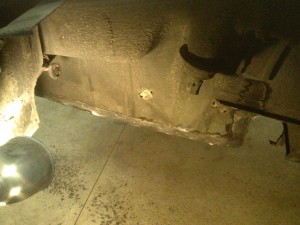 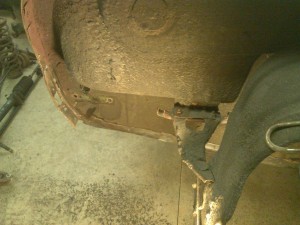 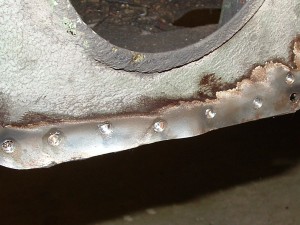 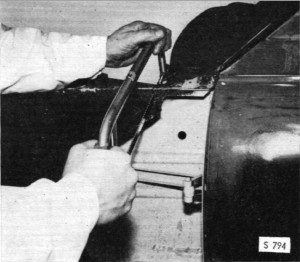 It was time now to start drilling spot welds and grind tack welds. By the way, I may be using the term “tack weld” a little loosely but I use it to refer to any short seam weld. The trick to drilling a spot weld is to drill deep enough, with a large enough diameter, to cut through the first layer of metal, but not into the second layer. The photo shows that I got this pretty well, except for one where I drilled clear through. I blame that on rust. There are additional spot welds on the upper, inner side of the wheel housing where it is welded to the firewall. And, there is a reinforcing stay running from the firewall down to the inside of the wheel housing. This isn’t shown in the photos, but I drilled the stay loose from the wheel housing but left it welded to the firewall. It should help in positioning the replacement wheel housing. I also drilled the spot welds attaching the hood-lock rail to the wheel housing. Also not shown here, but described on page 810-5 of the shop manual, I used a hacksaw to remove the transverse stay pipe connecting both wheel housings. One other hacksaw cut I made was to cut through the wheel-house flange by the dash panel/firewall. I didn’t photograph this but I included an image from the shop manual for reference. 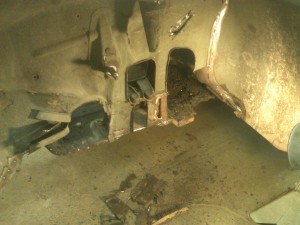 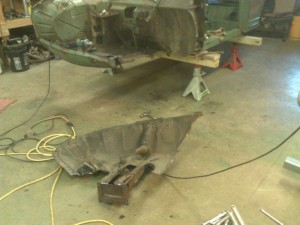 Still remaining were the tack welds. For the welds at the rear of the wheel housing, where it was welded to the firewall, I used a thin 1/16″ (1.6 mm) cutting disk in my angle grinder to just cut through the wheelhouse flange around each weld, without cutting through the firewall. I will grind the welds off later. And, the hood-lock rail, although drilled loose from the wheel housing, was covering one tack weld on the firewall. I removed the hood-lock rail by bending it at the weld a few times till it broke loose from fatigue, and I then cut around the weld with the cutting disk. To gain easy access to the welds at the base of the wishbone tower, I cut away sections of the wheel housing and used a grinding disk to grind the fore and aft welds. The remaining welds were more easily accessed from the inside of the wheel housing. And lastly, I cut through that hidden tack weld at the front cross member with the cutting disk.
Many of the spot welds were still clinging a little so I used a hammer and chisel to separate the wheel housing from the floor at those spots. And finally, the wheel housing fell to the floor, after bouncing off my knee while I was chiseling the last stubborn spot weld. 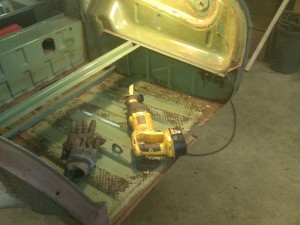 Turning my attention next to the other end of the car, a sawzall and hacksaw made quick work of removing the rear cross panel. I made the same cuts here that I made on the donor car to facilitate welding the new panel in place. 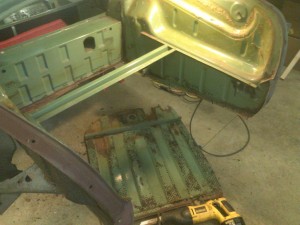 Portion of Trunk Floor Cut Away 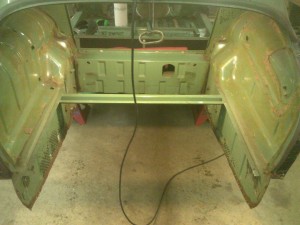 Because I was trashing the rusty trunk floor, I found it easier to remove by cutting away the majority of it with the sawzall. I then used the sawzall and hacksaw to cut across the axle housing wall where I plan on joining the replacement from the donor car. After that, I drilled the spot welds necessary for removing the remnants. And finally, the trunk floor was cleanly extracted as shown in the photos.

Getting Ready to do Some Blasting 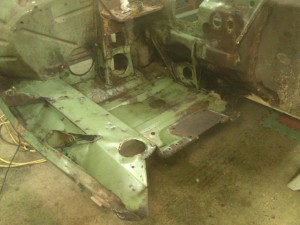 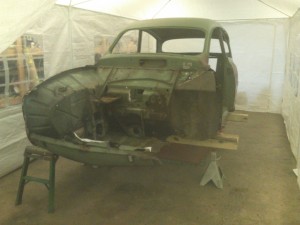 I did a little cleaning of the engine bay floor to get rid of the excess crud. I will repair the driver’s side back corner area before installing the replacement wheel housing. Before starting any repairs or installing donor panels, I will do some blasting to clean the affected areas. Because I’ll be blasting inside my barn, I need a way to prevent the blasting media from scattering all around inside the barn. I came up with the maybe-not-so-bright-but-it-should-work idea of setting up a party tent over the car to contain the media. It’s kind of neat in a way, I hope it works.

It will be rather time consuming making repairs and installing replacement panels but I will document it all in my next post. However, that may take awhile.

One thought on “Some Major Surgery”