Home » Uncategorized » Getting Ready to Work on the Body 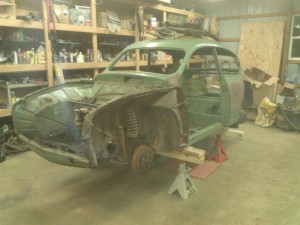 I’m getting close to doing some actual restoration work now instead of just taking apart and cataloging. I’ve got the car on stands now, ready to remove suspension components. Although I eventually plan to put the shell on a rotisserie, I can’t put it on the rotisserie yet because I’m removing and replacing the left-front wheel housing to which the rotisserie would be attached. I would have similar issues at the rear. For now, I am only cleaning the small areas I need to for replacing the damaged body areas. Once the car is on the rotisserie, I plan on cleaning/blasting the whole shell. 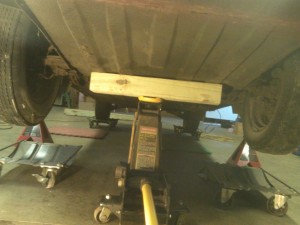 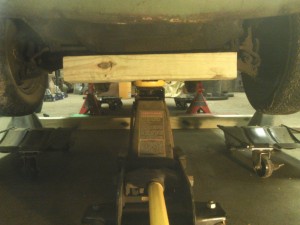 Putting the MC850 on Stands
Before removing the fenders, I put the car on stands so I could remove the wheels and have sufficient underbody clearance for removing the suspension. The four photos to the right show, respectively, the rear being jacked, the front being jacked, the rear support points, and the front support points.
I found that a 6 foot 4×4 placed on the jack stands gave me a convenient place to place small blocs of wood to support the body at appropriate points. A few pieces of half-inch OSB were placed at the rear, directly in-line with the inner side of the sill member (or rocker panel, or scuff-plate as Saab called it). This is forward of the trailing arm mounting, and near the B-pillar. At the front, some 1-1/2 inch lumber under the outer edge of the sill, directly under the door pillar, looked like a strong point. 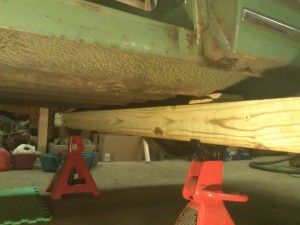 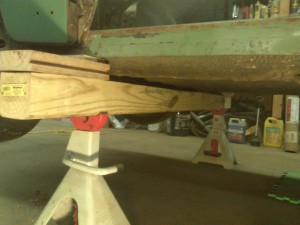 The jack stands, by the way, are 6-ton stands. I found the pocket on the top was just shy of 3-1/2 inches, and a 4×4 with slightly rounded corners fits nice and snug. I just used jack stands alone when I dismantled the donor, and I almost knocked the body off several times. I like this arrangement a lot better. The closeups to the right show the mounting points at the rear and front, respectively.

Rust and Collision Problem Areas
The seven pictures below show problem areas that have to be dealt with. The biggest issue is the crumpled left-front wheel housing. Then, there is rust damage on the trunk floor and back latch panel. These two areas involve replacement with donor car sections. I will deal with the other rust areas after the body is on the rotisserie.
My next post will cover suspension removal. Till then… 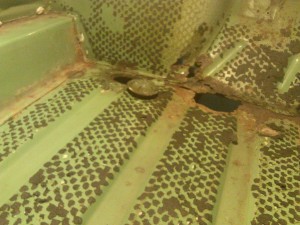 Right Side Floor and Rocker/Sill Rust 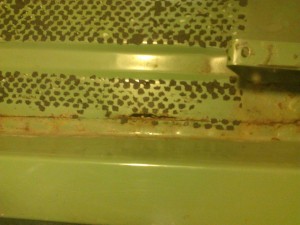 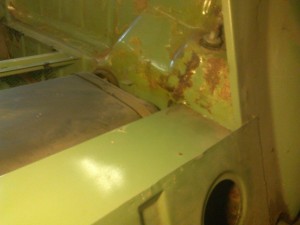 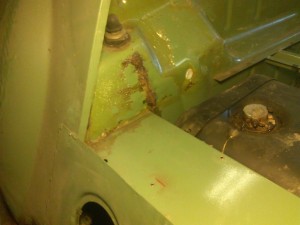 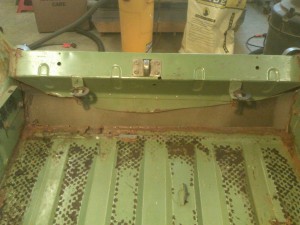 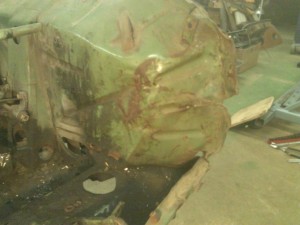 One thought on “Getting Ready to Work on the Body”